There I was, standing like a bouncer, watching over women that pawed and clawed at open cubbies of bras and mismatched panties (you cannot—cannot—call them underwear when you work in a lingerie store). The line to the register snaked through the store, so it made the most sense for women to just line up and grab their haul as they got through the queue. But one woman merely stood behind me looking at her phone. It seemed strange to me in this chaos that she chose behind me to check her Instagram. So I offered my help (what little help I could offer – I’d offered to do a one-day gig at a mall chain lingerie store). Her initial confusion instantly turned into Boxing Day Rage as she lost it on me. She thought she was in line and expressed her right to get to the front now. While she turned a few heads, the store was so packed with shoppers concerned with their own bags, that I realized life would be easier if I let this poor, clueless but emotionally tyrannical woman into the line. And I did.

As much as we laugh at the YouTube videos of American Black Friday Walmart shoppers, it can get pretty intense on our side of the border on December 26th. And while Black Friday here is trying to push Boxing Day down the hierarchy of “Best Shopping Days Ever!”, the post-Christmas shop is still a day to be contended with. One in two Canadians planned to score Boxing deals last year, according to a 2015 ebates.com survey. With about 11 per cent of Canadians working in retail, show data from Statistics Canada, there aren’t many people not at the mall on Boxing Day. And lingerie is one of those things you are more likely to buy in-store. A CouponCabin.com 2015 survey reports that 86 per cent of women prefer to buy their own lingerie, and 72 per cent prefer to shop for lingerie in-store rather than online.

The majority of women I saw shopped between the hours of 10am and 4pm And you’d think that by 4-ish, everything would have been picked over, but no. Shop at dinner time if you want! The stock room was, well, stocked with boxes labeled “boxing day” and their regular merchandise was being held back until the New Year. Only one hanger of “New Arrivals” sat in the store. At the very back. But if you had the tenacity to make it there, you’d find three different styles of camis. They were not on sale. But back to the Boxing Day stock: These were not regular items, but shipped in and specifically manufactured for Boxing Day. And everything was packaged by item and size. As you spend minutes upon minutes looking for matching panty, know that they’re not a set. And if you do find a matching set (lucky you!) it’s just a colour-way that conveniently coordinates so don’t get too obsessed over it.

As for who else was shopping: teens, and lots of them. There were more pimples than nipples in the store. You could sense the empowerment as the GF showed her somewhat lax BF what she likes. He likely bought her a gift that wasn’t exactly representative of his feelings for her, and this “day out” was his lesson and punishment at the same time.

There were women shopping who knew the Boxing Day game and how to play. They were the ladies that entered the store at 4:30pm like it was an opening scene of Real Housewives. Their hair was perfectly curled and their pouts pretty in pink. Thank goodness they avoided the rush, as their large handbags would have surely sucker-punched a teen boy as they cat-walked the aisles. They knew exactly what was what. As I offered to help find a size, I was told “No, I know where what I need is.” They’d been in the store a few days before Christmas and sized out the joint. She knew more than I did (and she knew it).

I also learned that many of the staff were just like me. Boxing Day represents one week of sales for the store, which is why they staff 25 to 30 people that day with people like myself. Valentine’s Day is nothing compared to Boxing Day, my manager told me. Us temp folk might not know the answer to your product questions, but we are earnest in trying to help you out. And we can bring you to someone who can tell you what’s what. Another thing I learned from working Boxing Day at a mall lingerie shop? I’ll be on the couch this December 26th. Cyber Monday is more my thing.

The Fashion News You Missed…

How The Recent Menswear Shows…

Maya Fuhr Wants You to…

16 Ways To Minimize Your…

Meet the Canadians Behind Some… 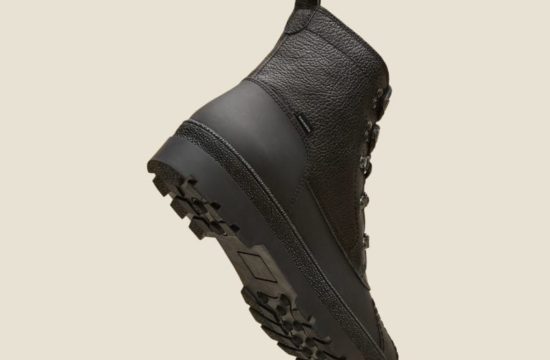 What Went Down at Last…