Back in the late ’90s and early 2000s, it felt like Yu-Gi-Oh! was seen on the playground as the game only played by the kids who wouldn’t play Pokémon. Nonetheless, the franchise has persisted for nearly as long as those popular pocket monsters, and has always maintained a passionate following. Naturally, this led to the production of many video games, but most of these releases arguably lacked that special something needed to capture what made the real card game so compelling. Yu-Gi-Oh! Master Duel is Konami’s latest attempt — a free-to-play card game looking to become the Yu-Gi-Oh! game you’ve been waiting for. In many respects it pulls this off, although there are some rough edges to this release that hold it back from greatness.

Yu-Gi-Oh! Master Duel is a ‘pure’ digital card game in the same way that Legends of Runeterra or Hearthstone are—there’s no real story nor is there an RPG-like ‘game around the game’ to help anchor the deckbuilding in a more concrete universe. It’s just a bunch of menus and a lot of cards to sort through, and in this regard it’s everything you could’ve hoped for if you’re the kind of player who really likes to cut to the chase and get into the weeds of learning an incredibly in-depth game. 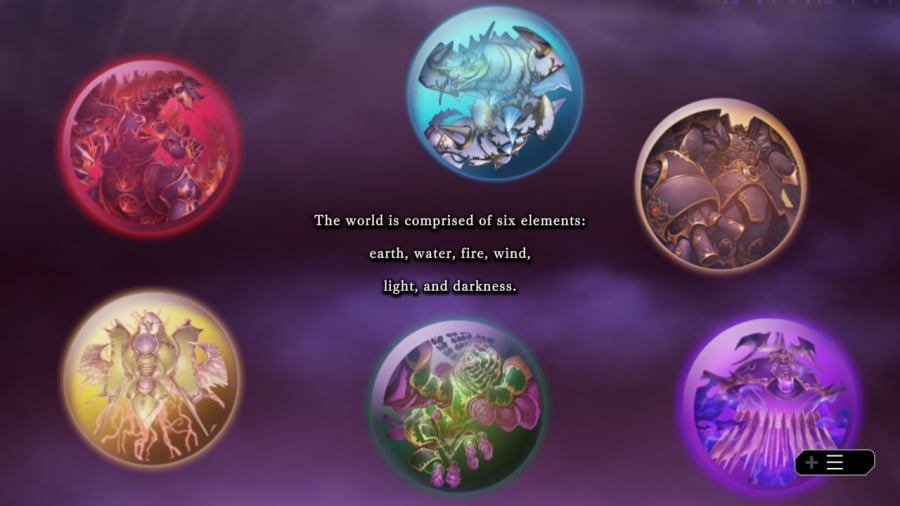 That depth is perhaps the main sticking point of this release, so let’s just jump right into that negative before getting to the positive. Simply put, Yu-Gi-Oh! Master Duel is a rough game to contend with if you’re a newcomer who doesn’t already know what you’re doing. There’s a veritable mountain of rules and concepts to learn, and you’re certainly not going to pick any of it up without spending quite a bit of time crawling through online wiki databases and YouTube videos. An early in-game tutorial does a somewhat decent job of giving you a crash course in the basics of a match, and subsequent single player campaigns help to build on this with piloting specific decks, but there is a considerable amount of extra knowledge you need to acquire before you can reasonably hope to stand a chance against real world foes.

Many of the higher level cards come with novellas in their descriptions laying out the trigger conditions and obscure talents of that card, and it can be exceedingly confusing to begin building a knowledge base of how to use them effectively when there are so many terms that are never explained but sound extraordinarily important. Even once you understand the cards better, knowing how to effectively use them in tandem with each other to get the best performance really requires you to do your homework. A number of our matches online were thus spent watching the fireworks as our foes methodically managed to somehow continuously play, summon, and destroy cards en masse until dropping a bomb that wiped us out in one turn. Not every battle went this way—we even won several of them—but there’s a pervasive sense that the new player experience in Yu-Gi-Oh! Master Duel could use quite a bit of work. 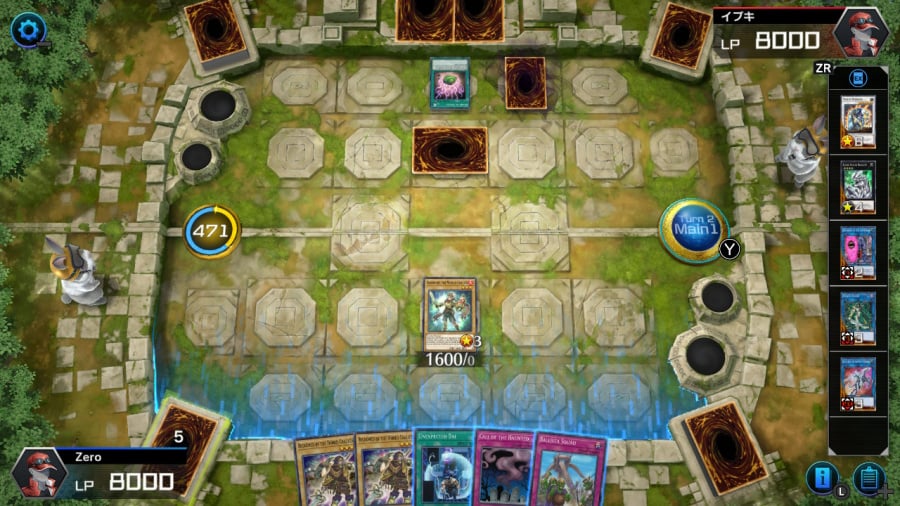 If you can get past that enormous barrier to entry, however, Yu-Gi-Oh! Master Duel has a lot to love. The main draw of the experience here is, of course, the online matchmaking, which just pairs you with someone that’s (hopefully) at your skill level and has you battle it out in a one-and-done duel. If you win, you move up a little bit in your rank and get more experience points, which grant you both more crystals to spend in the shop and more levels unlocked in the battle pass. It’s a simple system, sure, but very effective in keeping you locked into the loop of spending your winnings on crafting and pulling cards so you can go back in to win more battles and thus win more rewards.

If you’re not much into competitive multiplayer, however, there’s not nearly as much content to parse. Those abovementioned tutorials act as interesting introductions to lore and give you a thorough understanding of specific cards or decks, but it doesn’t take too long to chop through these ‘Gates’ and be left wanting more. Of course, there’s no reason to believe that Konami won’t be adding more content to this section over time, but it feels a little underwhelming if you’re the kind of player who would rather keep to themselves.

If you want to even remotely stand a chance online, you’re going to have to invest your limited resources in building a proper deck and this is perhaps where the most divisive element of Yu-Gi-Oh! Master Duel comes in. We’re happy to report that the card shop doesn’t feel like it’s too pay-to-win, but bear in mind that this is also a fresh game and that developers are usually a lot more generous with the free in-game currency on a new release like this. At any rate, you spend crystals to buy card packs, and you acquire more crystals by either paying for them with real money or earning them through winning duels and completing simple daily missions. There are a lot of potential card packs to pull from, and rare cards in a pack will usually further unlock ‘Secret Packs’ that are built around those cards, but with the caveat that they disappear within 24 hours. Of course, this is where Konami is twisting the knife, because if you really want to take advantage of the increased chance of getting the cards in those limited time secret packs, you’re probably going to have to either play a lot of Yu-Gi-Oh! Master Duel in the next day or shell out the cash to shore up your crystals enough. 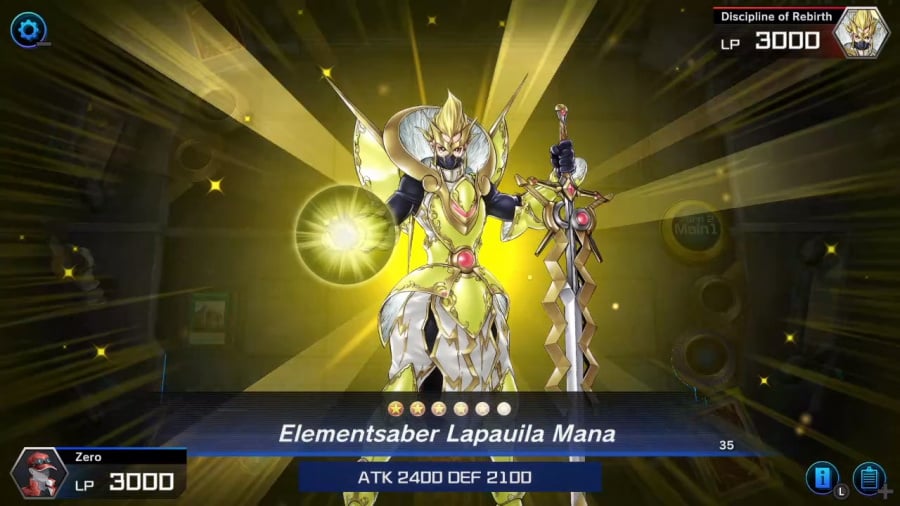 Luckily, cards aren’t added to your collection only by random gacha pulls, as you can go into the deck editor and destroy unwanted or extra cards and use those resources to craft any card that you want. It takes a fair amount of planning and commitment to a specific deck given that your resources here are quite limited, but it can be satisfying to slowly put together a deck that you understand and know will be fairly competitive when you go online. All of this is to say, we’re rather pleased at how Yu-Gi-Oh! Master Duel continuously finds ways to give you more cards over time without absolutely showering you with them, but we can also see this very quickly turning into an enormous money and time sink if Konami starts being stingier with the crystals or starts meddling with pricing.

As for its presentation, Yu-Gi-Oh! Master Duel manages to satisfy, although the current build available at launch is greatly let down by its performance. Card art is nicely detailed and the animations and effects that play—especially when someone slaps down a high level monster—can make for quite the colorful spectacle. It is simply a card game at the end of the day, so there’s perhaps only so much you can expect out of the visuals, but we were rather impressed at how much energy all the sound effects and animations add to the experience.

What we weren’t impressed by was the awful performance on display, which is downright disappointing. Upon booting up the game for the first time, we were greeted by a message that basically told us the game will crash and that it’s being looked into. The message certainly didn’t lie, as there were a few instances where a sudden shutdown forced us to have to restart and try to remember where we were in the deck we were building. Beyond this, every time the game moves screens or menus, there’s a substantial few moments of lag where everything on screen almost freezes while you can just about hear the game wheezing. We’re confident the worst of these issues will be ironed out in the coming weeks post-launch, but just be warned that the Switch is probably that worst platform to play Yu-Gi-Oh! Master Duel on at the time of writing.

Yu-Gi-Oh! Master Duel is an odd game to recommend. Those of you who have never played before may want to check it out—it’s free after all—but even at that lowest of prices the barrier to entry is so great that it can feel like getting stuck into this one isn’t really worth the effort it would take. Those of you who have a longer history with Yu-Gi-Oh! will have a much better time getting into it and climbing the ranks, but then you were probably going to play this game regardless of reviews. At any rate, Yu-Gi-Oh! Master Duel has all the foundations of a potentially great online card-battler, and though it has its issues — at least at launch — it’s definitely worth checking out if you’ve got the fortitude to stick with it.