Would you like to read an urban-fantasy-themed and deeply narrated comic book while playing video games in the meantime? If your answer is Yes, I am happy to tell you; Mayhem Brawler is here for those who crave some first-class nostalgia!

Mayhem Brawler is an urban fantasy-themed beat ‘em up that brings back the ’90s arcade vibe to your home. With comic book art style and its unique storytelling, it will be a riveting journey, as you beat up bullies and read the issues of Mayhem Brawler. You will be in control with Trouble, Star, and Dolphin, the three front-runner metahuman officers of super-powered law enforcement agency Stronghold.

As you go on patrols to investigate Mayhem City’s darkest corners, a sequence of events will alter the fate of your odyssey. “In the day of a super-powered law enforcer” was the core idea when we started developing Mayhem Brawler. Unlike the classic beat ‘em ups where you “save the girl, be the hero of the day,” you will be working with heart and soul in the name of protecting the Mayhem City. The notion of saving the whole neighborhood is more fitting for a True Superhero!

Another refreshing addition that makes Mayhem Brawler stand out is the enemy variety. Since our creative director formed an urban fantasy-themed universe, everything was fair game. Sharp-toothed and clawed lycanthropes, rich and fearsome vampires, firearm and knife conjuring wizards the list goes on! We even have “Mejins” who came from another dimension and possess spectral powers. Our minions have individual looks to make them feel unique as well. Each opponent has specialized traits, abilities, and attack patterns for you to be careful with. For instance, Mejins can hurl Spectral Blasts from the other side of the screen. You better arrest them before they zone you from the other side of the streets.

Minions of Mayhem Brawler are not the only subject matter when it comes to originality. Thanks to the gigantic lore written for this project, we created a “choices matter” progression system and levels entirely different from one another. Arcs will be represented as comic books, making you choose your wanted issue after you clear the stage, and experience your own story. Every level has its distinct themes, stories, opponents, and Bosses who are related to your choices and the story as well.

Out of twelve stages, you will go on seven patrols in one playthrough. Our officers will face three different endings and unearth the dark mysteries of the story depending on your choices throughout your patrols. We hope that this execution will raise the replayability and make the journey feel unique to players. It sure is amusing to talk about what sort of adventure you’ve experienced with your friends and theorize about the future of that story. The game will offer couch co-op multiplayer as well. You can tag along for the patrols with your colleagues and help them out as you uncover the mysteries together. One thing to note is that there will be an option to activate “Friendly Fire” in the character select screen. Yes, you can throw barrels at your colleagues. Perfect for ruining friendships!

Speaking of throwing barrels, our combat mechanics might feel pretty familiar to the veteran players. We have our bread-and-butter jabs, distinctive to every officer. Special Defensive and Offensive abilities to spice up your combos. Dash, Dash Strike, and Dash Jump Strike for a more mobile engagement. And utilizable weapons. Currently, these are all known mechanics from the classic beat ‘em ups that inspired us. But implementing the RPG-Like “Condition Effects” was our fresh take on the genre. Specific moves, abilities, and weapons will leave the target with particular condition effects such as Dazed (suppresses the countering capabilities of your enemies) and Bleed (your target takes additional damage from attacks) to give you advantages in combat. Using these effects will help you achieve better damage potential and faster stage completion, meaning that you will get higher scores upon beating the game. The bigger the better right?

It was a long two years from the moment we’ve started to give life to this project. Hero Concept has always been a big fan of comic books that told unforgettable stories and timeless classics of arcade games. Fusing two subjects we love together was a dream come true moment for us. We hope that you enjoy the Mayhem Brawler’s dark yet amusing story filled with pop culture references, as you beat up bullies to a pulp. The game releases tomorrow on August 19 for Xbox One and Xbox Series X|S.

Heroes are made by the path they choose, not the powers they are graced with. You can be a hero! 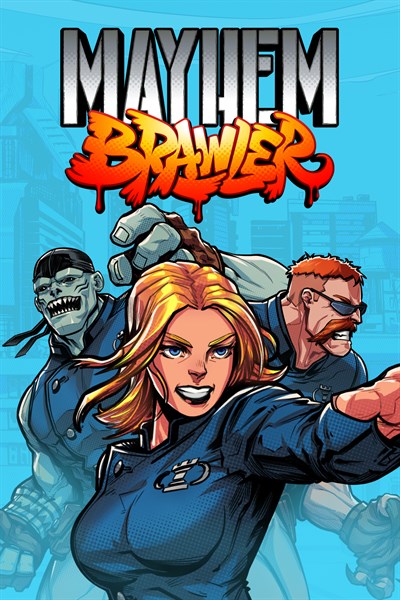 Mayhem Brawler is an urban fantasy themed beat ’em up that brings back the 90s arcade vibe to present day. With comic book style art and kick-ass soundtracks, it offers a unique experience that you can tackle solo or as co-op with friends while defining the next step in the story with your choices.

TO PROTECT AND SERVE
While answering a routine call on a patrol, Dolphin, Star, and Trouble -the most popular officers of the super-powered law enforcement agency, Stronghold- find themselves in a sequence of events that will alter the fate of the entire city.

EXCESSIVE FORCE
Let’s get one thing straight; if you ever think that a day in the life of a super-powered law enforcer is easy, you couldn’t be more wrong, as there are greater threats than street gangs in urban fantasy themed Mayhem Brawler. Using your arsenal of combos and special abilities, you and your co-op teammates should make life miserable for those super-powered criminals, fend yourself from the fury of werewolves, resist the hexes of street wizards and confront the megacorp led by vampire houses that enforce their goons to do their dirty deeds.

THE MAYHEM UNIVERSE
Comic book inspired hand-drawn backgrounds and frame-by-frame animations coupled with a kick-ass soundtrack will deliver a jolt of adrenaline to your controller. With the choices you make, you will shape the flow of the story and finally reach one of the three different endings in Mayhem Brawler universe, where each corner has a story to tell.