Latest News
Home /How Re:Zero – Starting Life in Another World – The Prophecy of the Throne stays true to the anime

Re:Zero follows Subaru Natsuki, an average high school student who is magically transported to another world where he has the power to “Return by Death,” or literally the ability to turn back time by dying. Season 1 and 2 have been very popular at anime streaming sites. If you are a fan of the anime, light novel, or manga, you do not want to miss the video game adaptation of Re:Zero.

Re:Zero – Starting Life in Another World – The Prophecy of the Throne is coming to PS4 on January 29 for North America and February 5 for Europe. Check out the game overview trailer we just released!

Today I have Alex Flagg and Hiro Watanabe, the localization producers for Re:Zero – Starting Life in Another World – The Prophecy of the Throne to talk about what goes into creating a video game adaptation of Re:Zero.

Since the Re:Zero anime and light novel are very popular in the West, a lot of people might know this already… But just in case some people are not familiar with Re:Zero, can you tell us a little bit about the overall storyline and how the anime and the video game adaptation are linked?

Hiro Watanabe: Re:Zero follows the story of Subaru, a shut-in living in Japan who finds himself transported to another world. He eventually falls for a silver-haired half-elf girl, who happens to be a candidate to become the next ruler of the kingdom, and discovers that he has the ability to go back in time whenever he dies, allowing him to redo the mistakes of his past. I don’t want to give too much away, but he ends up getting involved in a series of events involving assassins, cultists, witches, and some other eccentric characters. 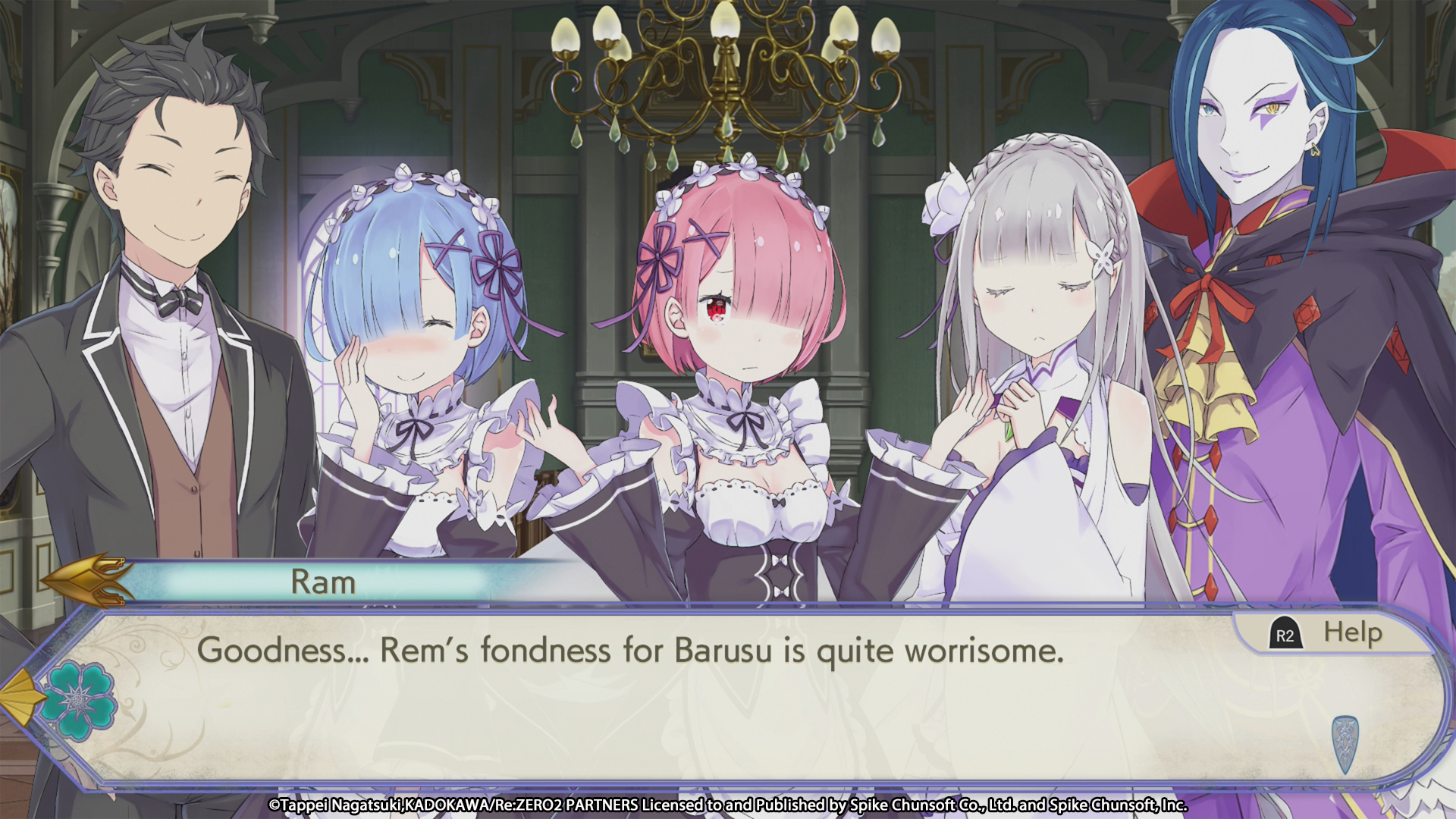 I heard the English dub cast of the Re:Zero -Starting Life in Another World- anime will return to reprise their roles! Was it difficult to do the recording while we were under quarantine?

Hiro: Recording under quarantine definitely came with its difficulties. Most of the work was done remotely, but we worked closely with the same studio that recorded the anime dub for this series, and the VAs and directors are all fantastic at what they do. We did have some technical hiccups along the way, but I think the end result turned out great. 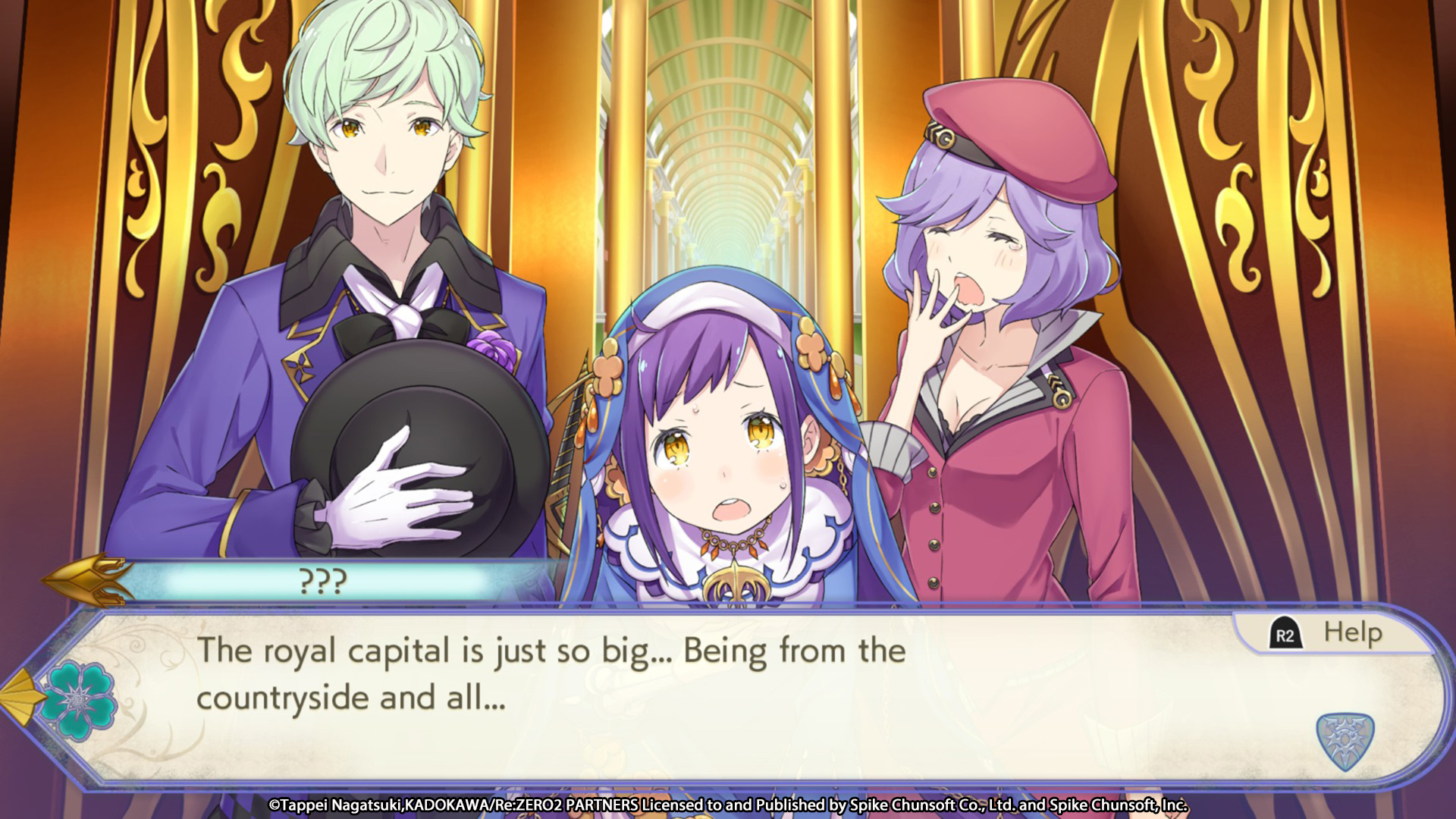 We know that there are six new characters. Can you tell us a little bit about Melty and how she is involved in the royal selection?

Hiro: Melty is the nun that’s been featured in a lot of the promo material for this title. She’s a candidate of the royal selection, but has a more gentle and reserved personality compared to the other royal candidates who tend to be more headstrong. She and her camp bring an interesting dynamic to the cast, and those who are familiar with the series might enjoy seeing how events play out differently with their involvement.

We know there is already a big fan base for Re:Zero. Was there any challenge to make the game appealing to the existing Re:Zero fans?

Alex:  There were certain things we knew fans would be expecting from this title. Like, “this has to be in a Re:Zero game.” One of those key points would be Return by Death. It’s such an interesting and unique part of Re:Zero, so we are happy to say it is implemented into this game.

Hiro: Return by Death is an iconic part of the series, and works well as a game mechanic in which one of the main objectives is to gather intel and items to help you get through obstacles. I think fans also enjoy Re:Zero for the storyline and character interactions, so I think they’ll appreciate that this title was fully supervised by the original author, Tappei Nagatsuki. It was a challenge with so many mediums of this series using different terms and phrasing, but we (especially our editor) put extra care into researching the characters and story for this game.

Alex: I think the biggest draw of the game is being able to see your favorite Re:Zero characters in new situations and storylines. They’re expanding the world a bit with this title so that will be very cool for fans of the series.

Hiro: With the script having been supervised by the original author Tappei Nagatsuki, the character designs done by the series artist Shinichirou Otsuka, and both the Japanese and English cast reprising their roles for this title, I think there’s a lot for fans who are looking forward to more Re:Zero content to enjoy. Also, it’s always fun to see your favorite characters in new situations like Alex mentioned.

Thank you Alex and Hiro!

Re:Zero – Starting Life in Another World – The Prophecy of the Throne will be available on January 29 for North America and February 5 for Europe.

With digital pre-order, you can get PS4 exclusive avatars and PlayStation Plus users will receive 10% off.

The physical Day One Edition includes 4 exclusive, limited run only original pins in a display box, featuring Emilia, Subaru, Rem, and brand-new character Melty. These are exclusive to physical copies of the game and will not be reprinted, so pre-order today.

The physical Collector’s Edition includes four exclusive, limited run only original pins in a display box, featuring Emilia, Subaru, Rem, and a brand-new character Melty, a full-color art book including concept art, sketches, and commentary with a special foreword from the creators, a SteelBook collector’s display case, the official soundtrack containing original music from the game, and the Collector’s Edition outerbox!