Rhythm games on Switch have some strong competition, what with the excellent likes of Thumper, Taiko no Tetsujin and, of course, the immortal presence of Hatsune Miku. That said, Double Kick Heroes features heavy use of firearms, something even the mighty Miku never indulged in. Oh wait, yes she did. Never mind.

But we digress. Double Kick Heroes is about rocking out through a zombie apocalypse, and being pursued by said undead across the broken highways of America’s decomposing corpse. Not even metaphorically, either. Essentially, it’s akin to the likes of Konami’s Beatmania, with your beatmap running across the bottom fifth of the screen, while above you a scene of road warrior horror plays out.

Your band – the Double Kick Heroes of the title – take potshots at a pursuing zombie horde, their aim determined by your choice of button used to hit each beat as a diverse metal soundtrack plays. If a zombie is “high” on the screen, for example, you’d tap the A button. “Low”, and you’re better served with the B button. You’ll also need to steer the car itself to avoid attacks from larger monsters or other vehicles, but by default this feature is automatic; we recommend keeping it that way, as the game is demanding enough that you’ll spend most of your session laser-focused on the beatmap anyway, with little opportunity to take in the sights of the road. 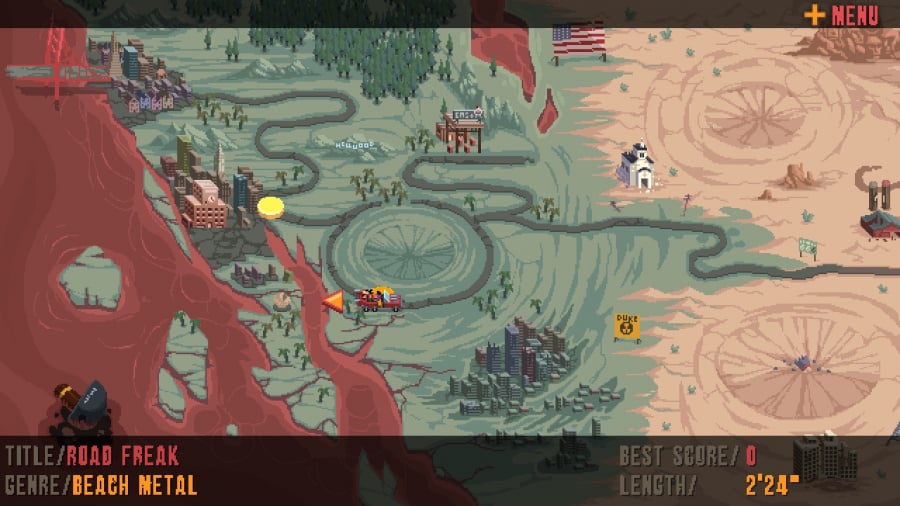 Initially, this was our major issue with Double Kick Heroes; there’s a lot of stuff going on, but you need to keep your vision cemented on the black strip that houses all the beats that have to be hit, making it all feel a touch moot. Hitting said beats in the correct timing will gradually cause your weapon to become more powerful (pistol to shotgun to cannon, etc) but ultimately you don’t really get a chance to appreciate it as the best you can really do is quickly glance up to determine whether you need to be firing high or low. It’s a game that feels unforgiving, even on its “medium” difficulty; we tried out the higher skill levels and got absolutely pasted. There are easier modes, but this one feels like it’s definitely for seasoned rhythm game fans overall.

Another problem we ran into was the onset realisation that the music just wasn’t doing it for us. This is a difficult thing to grade, given the sheer subjectivity of music taste, but in rhythm-action games the more memorable the songs the better (anyone who’s played Gitaroo Man remembers every single song) and the offerings here just slipped in one ear and out the other. It’s an admirably eclectic mixture of metal subgenres, but the tunes just weren’t getting our toes tapping – and that’s a pretty major bummer in a music-based game. Obviously your mileage may vary on this one, but we’ve definitely heard better from this genre. 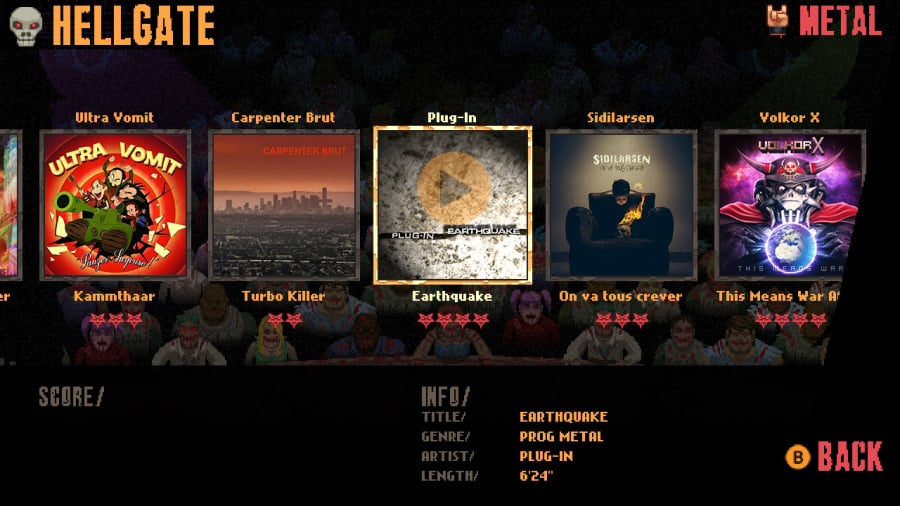 Thankfully, other elements of Double Kick Heroes are more than just up to scratch. The core Adventure mode is a lot of fun, with enjoyable characters, well-written dialogue and fantastic spritework that recalls the likes of Day of the Tentacle in places. Besides the story there are plenty of instant-action modes to pick up and play – Arcade lets you tackle any song you’ve already unlocked, while the rather lovely Hellgate mode showcases music from guest artists – including the esteemed likes of Gojira and Carpenter Brut. With respect to Double Kick Heroes’ composer(s), this stuff should have really been in the main game, but it’s awesome that it’s included at all. Additionally, there’s an endless mode where you play song after song, not to mention daily challenges.

We should definitely mention the rather brilliant motion controls. Traditional button options are available, but honestly feel inadequate for the harder skill levels. Double Kick Heroes lets you play with two sets of Joy-cons; one in each hand, and one tucked into each sock. This is absolutely bonkers, but actually the most effective way to play the more hectic songs in our experience. We’re sure most gamers will choose to stick with the traditional controls, but Double Kick Heroes has to be commended for this originality.

There’s plenty to commend Double Kick Heroes for; it’s an ambitious game, with great-looking pixel graphics, plenty of songs and modes, an enjoyable story and a general vigour to it that underpins its heavy metal aesthetic very appealingly. Unfortunately, we feel like it tries to do a little too much and ends up being rather confusing and slapdash in execution. We found the central rhythm-action gameplay to be the worst part, and that’s not a great thing in any game. The disappointing soundtrack only compounded this problem, but we do appreciate that it’s going to be a matter of taste in this regard. This leads us to a bit of a conundrum; Double Kick Heroes clearly has an enormous amount of love poured into it, but it’s not enough for an unqualified recommendation when we just didn’t quite have enough fun with it. A sequel could refine its more confused elements into something wonderful, but for the time being, you may get a (Double) kick out of this effort.