In Hyper Scape, 99 players drop into the virtual city of Neo Arcadia to compete in Crown Rush, a competition for teams of three competitors or solo players. To win in Crown Rush, you need to either be the last team standing, or grab and hold onto the crown for 45 seconds, during which all remaining enemy players can see your location.

When you drop in, you’ll start with nothing but a melee weapon, and have to scour the map for weapons and hacks to complete your loadout. Hacks are abilities you can equip to become invisible, teleport, drop enemy-seeking mines, and so much more. You can swap out weapons and hacks with any others that you find to suit your play style and situation. Finding duplicate weapons and hacks allows you to fuse them to create more powerful versions, and if you fuse an item four times, you’ll to unlock its maximum potential. Tailor your loadout to create powerful synergies to take on your foes, and prepare to defend against whatever they throw at you.

Death can come quickly, but being eliminated in Hyper Scape isn’t the end. If you’re playing in squads, you won’t be out until your entire team is wiped. When you’re eliminated, you become an echo, and are still able to traverse the map, ping locations, and communicate with your teammates. To return to the fight, you and a surviving teammate will need to activate a restore point. Restore points drop anywhere an enemy has been eliminated, but can only be used once.

Season 1 expands the combat possibilities of Hyper Scape by adding a new gun, the “Dragonfly,” as well as a new hack, “Magnet,” for a total of 11 weapons and 11 hacks. The Crowncast extension for Twitch is growing as well, and new features like Kudos will allow viewers to react to exciting moments by using Bits to generate visual effects that appear in a streamer’s game. Crowncast’s in-game event voting system will also see the addition of the Melee event, which makes melee weapons lethal with just one hit. Lastly, Hyper Scape Season 1 is adding free and premium Battle Passes with 100 tiers of items to unlock, either through playing or watching streamers using the Crowncast extension.

Hyper Scape launches on Xbox One today, so get ready to slide across rooftops, leap over buildings, and dash for the crown as you fight to come out on top. 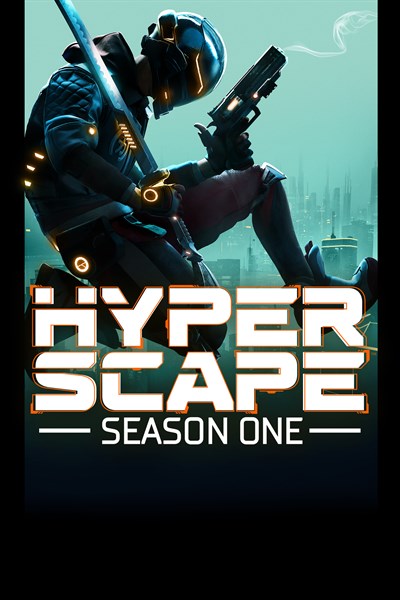 Hyper Scape is the one and only urban futuristic free-to-play battle royale where 100 contenders engage in first person close-quarters combat and fast-paced matches to become the next global superstar.

Three decades in the future, life is idyllic … for the 1% that can afford it. For the rest of the 10 billion souls trapped in the crush of the megacities, day-to-day life is a grind. The one escape is into the Hyper Scape – an immersive online environment used for work, study, and play. The fastest way to rise to the top and change one’s lot in life is to compete in Crown Rush, an intense urban battle royale taking place at the heart of the Hyper Scape. Win at Crown Rush, and change your life!