Hello space conquerors! We’re excited to finally get our second Age of Wonders: Planetfall expansion, Invasions, into the hands of our fans. As everyone jumps in, we want to give players both old and new a few tips to help them prepare for what’s ahead. I will go over specific tactics to deal with a few of the biggest new features coming with Invasions, and share a couple of general Planetfall tips that everyone should be aware of when diving in.

While the Shakarn are tough and brutal, making them nearly unstoppable infantrymen, their cold-bloodedness and lizard skin aren’t always an advantage. Don’t get so caught up in their humanoid form that you forget their lizard physiology. The Shakarn are more vulnerable to status effects, so use crowd control to slow their merciless movements and keep their aggression at bay.

Flip that on its head when you swap sides. When playing as a glorious lizard overlord, close the distance fast and sabotage the enemy, then wipe out the remains. The Shakarn are swift, synergistic, and surgical so always play to these strengths. Of course, your Domok are always content to rush into battle, but your Zardas have some tricks up their sleeve which might just save a life… or ten!

Dealing with the Therians

Therians, like the Shakarn, have their weaknesses and strengths. Yes, they’re humans who utilized completely unethical gene splicing to magnify their already formidable evolutionary power. But they’re also mostly human— just a little more fur than normal. Lean on that when you choose your weapons, but don’t forget that they’re tougher, faster and stronger than humans. Who you target first will be critical, as damaged Therians produce fast-acting pheromones that boost each other’s power, turning a seemingly normal platoon of Therians into unstoppable juggernauts before you can take them down.

And of course, the big bad that the expansion owes its name to…the Invasions. This is where we want you to put your skills to the test on your own. Stay alive and stay building! Can we tell you what they’ll look like? No, although a few hints might trickle down the line just before they drop. If you pay attention, you might just discover a counter strategy which saves your whole game. Can we tell you whether you’ll likely succeed? Not really… these are cosmic events we’re talking about. Anything can happen, and it’s best to be prepared. Planetfall could show you mercy or utterly crush you. Whether you succeed or not is a measure of your leadership and tactical mastery. Good luck!

Power is knowledge plus control…and more is always better. Always try to expand your empire as quickly as possible, taking terrain, landmarks and resources into account. Scout your surroundings to discover settlements and integrate these using your influence to gain a strong early-game boost. Allies are worth more than prisoners, and in many situations, you can accomplish more with diplomacy than leaving a trail of corpses in your wake.

Established frontiers can quickly go from an exciting opportunity to a gaping hole in your defenses. For instance, hostile marauder units can seriously mess up your strategy; upgrade your garrisons and keep an eye out for them. Expansion is an enormous part of the game, but infrastructure is just as important.

The ever-changing world of Planetfall can be daunting, especially with new territories and races coming to the game. Take time to get to know each sector well and build sector exploitations with high levels to get the most out of each sector’s natural resources. Some locals provide great support throughout the game. Yes, even mind-reading symbiotic plants can be friends.

For battle itself, victory is in the details. If auto combat does not do the trick, watch the replay and retry the combat manually to get a better result. Auto combat helps with the pacing and evolution of the game, but the real tactical tests in Planetfall come from high-stakes, closely matched combat played turn-by-turn. A true strategist will plan ahead in their research by selecting multiple techs while holding the Y button to create a queue!

I hope these tips will be helpful to everyone and get you armed with the knowledge you need to tear the galaxy apart! Age of Wonders: Planetfall and our newest expansion, Invasions, is available now for the Xbox One on the Microsoft Store. 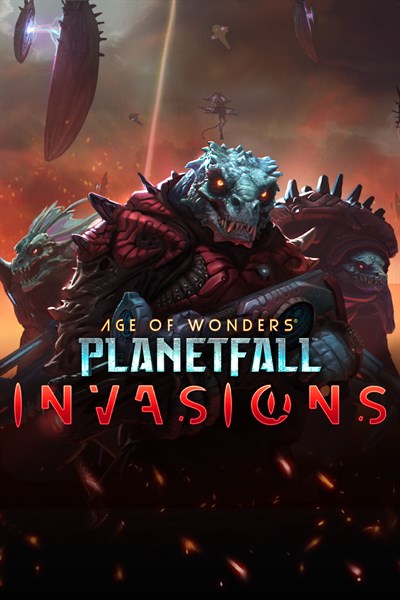 In the stardust and disunity of the collapsed Star Union, an insidious new race of conquerors has come to lay claim to the galaxy. Deploy and destroy as the merciless Shakarn, a vicious race of conniving lizardmen with holographic disguises ready to deceive, disrupt and disintegrate the last strongholds of human might. Utilize light and sound trickery to sabotage and scatter your foes from the inside out, overwhelm them with brutish alien force, or form the most unlikely of alliances: the choice is yours. Choose quickly though, as new environmental catastrophes can strike without warning, and enemies may spring from unexpected places. The Shakarn empire is ready to strike your enemies down, but do not make the mistake of being overconfident. Never forget that the greatest threats often come from above…

● The Shakarn – Planetfall’s newest playable faction gives new meaning to cold-blooded. These ruthless lizardmen can deploy units from the Zardas caste with holographic disguises to mimic and confuse foes or deploy the brutal Domok to crush them outright.

● The Therians – This NPC race of sophisticated warriors has accelerated evolution by fusing their DNA with that of animals. Under the rule of the mysterious Deer, this rogue militia has fled their home planet to colonize new worlds, but you won’t catch them in the headlights! They are formidable as friends or foes.

● Voidbringer Invasions – Face the ultimate late-game challenge as the enigmatic Voidbringers use trans-dimensional warfare to rain down legions of enthralled soldiers across your empire. Destroy their beacons and extinguish their colossal armies, or submit and become enthralled yourself to conquer the world in the name of the void.

● World Events – Battles can now be spontaneously shaken up by over 20 different environmental catastrophes covering everything from pirate uprisings to superstorms to solar flares. Each will require adaptive playstyles to truly test a player’s mastery of Planetfall.

● Additional Campaign Missions
Venture into new territory as the Shakarn begin their invasion of the Egalitarian League of Planets with two new campaign maps. The humans thought they had conquered everything, but the vast galaxy of Planetfall continues to grow…

● Conquered Worlds
In this team juggernaut-style game mode, form an alliance to topple a formidable kingpin. One player starts with a titanic empire, and all others unite to crumble their dominion to dust. Don’t get too envious– those who get used to being behind the sword may soon find themselves in front of it.