Latest News
Home /Everything We Know About Ghost Of Tsushima

PlayStation 4 owners have been waiting anxiously for Sony to release the system’s next two big games. The first, The Last of Us Part II, is just a month away, hitting on June 19. Ghost of Tsushima follows less than a month later, hitting on July 17. Ghost may end up being the last big PlayStation 4 exclusive, as PlayStation 5 is still slated to arrive this holiday season.

Sony has only shown Ghost of Tsushima a few times, and many of its details have been shrouded in mystery, but a recently released 18-minute video (which you can view below) walked us through some of the setup and action. We still have plenty to learn about this exciting historical game, but here’s what we know so far:

Who is developing it?
Ghost of Tsushima is being made at Suck Punch Productions, a Sony first-party studio based in Bellevue, Washington. The studio’s previous work includes the Infamous series of games on PlayStation 3 and 4, as well as the Sly Cooper trilogy on PlayStation 2. Ghost of Tsushima was first shown in October 2017 at Paris games Week.

What is the setting?
The year is 1274. The location is Tsushima Island, Japan. The Mongol Empire is invading and leaving behind a trail of dead, including the samurai that have protected this land.

Who am I?
You are Jin Sakai, one of the last of the samurai. To defeat the Mongol threat, he can rely on his samurai training to approach enemies with honor, or sneak through the shadows to eliminate them silently as a dishonorable ghost. He is brought to life by actor Daisuke Tsuji.

Other than the always-present Mongol conflict, Sucker Punch hasn’t spoken much about Jin. We know he’s one of the last of his clan, but haven’t heard if the story will explore his life and relationships. Other known characters are fellow samurai Masako, and the Mongol Empire’s general Khotun Khan, who is believed to be the main antagonist. Khan is played by actor Patrick Gallagher.

How is exploration handled?
We don’t know the exact scale of Tsushima’s open world yet, but you have the freedom to explore it at your will, from its towering mountains to its hidden shrines. You can run on foot, scurry up walls and rock faces, and also summon a horse to ride along paths and through dense forests. The world is lush in detail, and appears to be a place you’ll want to stop in often just to soak in its beauty.

Sucker Punch has made an effort to minimize information that is displayed onscreen. In the footage we’ve seen, there is no waypoint that shows you where to go. Instead, the player brings up a black-and-white map that they can use to highlight a desired location. Jin can then throw a flower into the air to see which way the wind takes him. This action, performed by hitting right on the directional pad, brings up a distance meter in the top-left corner of the screen that tells him how much further he needs to travel. If he’s heading the right way, the wind should be at his back and the number will shrink, but the number doesn’t stay there for long.

Sucker Punch says discovery comes in many ways. The player can obviously walk into new areas to find things, but visual cues will help steer them to points of interest. These hints include smoke on the horizon, oddly shaped trees, and animals and birds leading you in the right direction. As you explore, you’ll see the world is alive, filled with wildlife and people going about their business. You may even see the two unite and can come to the aid of someone being attacked by an animal.

How do I interact with the environment?
Jin can walk and run, jump, and scurry up small walls. He can also use a grapple and rope to zip across longer distances. It appears the grapple can only be attached to certain things. In a video we see his grapple point is a white rope that is wrapped around a wooden beam.

If the direct approach doesn’t work, Jin can stealthily sneak around the world. These actions are similar in design to the animations from the Assassin’s Creed series, such as the ducked walk along narrow beams or bounding up knee-high objects with little effort. 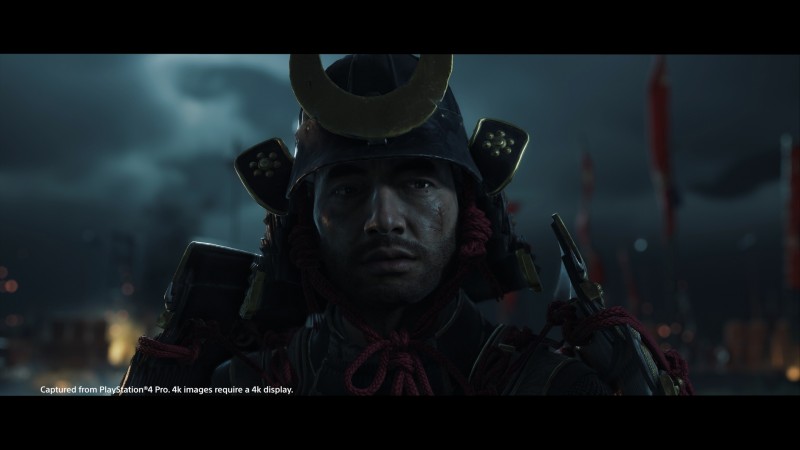 What am I doing?
While it appears you will have the freedom to explore the world mostly when you want to, many of your destinations will be occupied by Mongol forces. When you come across a new place, you’ll be alerted of its name, such as the Yagata Farmstead, which also carries a warning that is “Mongol territory.” We’ve seen a few missions in action, but don’t know if they are critical path or side missions. One tasked Jin to destroy a Mongol shipyard, and another to destroy a black powder cache. Both of these activities included extensive combat sequences and a fair degree of environmental navigation.

As he uncovers the land, Jin will come across shrines that he can interact with. One shrine was revealed after following a fox that appeared to be guiding Jin. He was given the option to “honor the shrine.” If he does, he earns progress toward unlocking an additional minor charm slot.

How do I play as a samurai?
This is an odd question, but it’s a choice that Ghost of Tsushima offers players. You can play as a samurai or a ghost. A samurai makes their presence known, whereas the ghost lives up to its namesake and delivers death from the shadows.

As a samurai, it appears defense is the name of the game. Jin is guarded in his positioning, and doesn’t appear to move around much, letting his foes come to him. While he can freely slice up opponents with his sword, this approach might require multiple strikes, whereas countering can fell an opponent in one hit. These strikes are gruesome and can lead to the removal of limbs and blood spraying through the air. Countering can also be used to combat archers who line the perimeter. If Jin’s timing is true, he will knock arrows out of the air.

When an enemy knows of your location, which is shown through a visual meter that fills up above their head, he can tap up on the directional pad to enter a standoff, which is a cinematic battle that again relies on timing and patience.

How do I play as a ghost?
If you fear you won’t stand a chance against a Mongol army head-on, you can use stealth to thin their numbers and bring fear to their hearts by being a threat they can’t track or fully comprehend. As you gain standing as a “ghost,” they will learn to fear you. They’ll run away when they see you. Being a ghost is dishonorable, but appears to be an effective approach.

When you sneak up behind a foe, you can hit the square button to execute them silently with a quick knife to the neck. Vertical spaces can be used for aerial takedowns, which can be chained to a second silent kill if an adversary is nearby. Additionally, you can spread these foes apart by throwing wind chimes or firecrackers that they’ll investigate, allowing for two stealth kill opportunities. 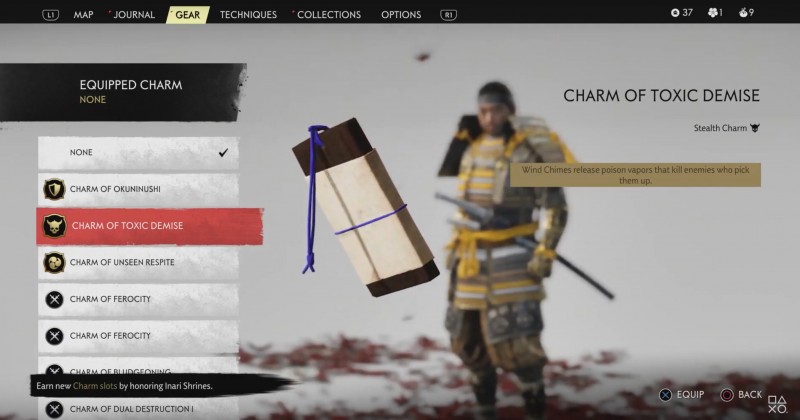 Is there customization and upgrading?
Jin’s armor set is fully customizable, and it’s not just about looks, either. Sucker Punch says the different armor sets bring mechanical advantages to both the samurai and ghost approaches. As you explore the world, you can gather supplies that can be used to create dyes that can change the color of your gear. You can pick bamboo, linens, and something just listed as “supplies.” Each of these things come with a number, such as bamboo x4. If you see a field of yellow leaves, you can turn your armor set that color. We don’t know if this will allow you to blend into that location better, but it does bring beauty to your look.

Jin earns charms along the way that enhance his gear. If he equips the Charm of Unseen Respite, his smoke bombs restore 25 percent of his health. The Charm of Toxic Demise adds poison vapors to his wind chimes. The Charm of Okuninushi allows him to slowly recover health outside of combat. In addition to charms, he can use technique points to earn and upgrade skills.

Will there be photo mode?
Calling it just photo mode isn’t exactly accurate. Not only can players snap images, Sucker Punch is letting them create short videos that capture the stunning movement of the tall grass and lightning bug-filled skies. Photo mode, which is also video mode, allows you to change the depth of field, direction and speed of the wind, and even what particles are in the air. For the videos, you can add music.

When is it launching?
After a short delay, Sony has locked in a July 17 release date for Ghost of Tsushima.